During the 70's the Dance Hall era in Texas was booming.  With three TV channels, no VCRs, DVDs, Internet or Mobile Phones, the one thing everyone looked forward to was the weekend dance.  There were many to choose from and it wasn't unusual to see 1000+ attendees in any of these.


Many of the founders, including Paul Haluska, Larry Gentry, Doug Hughes, Johnny Ross and James Garrett, left the group by 1980.  Carl Goertz was with the band until the late 80's.  With the 80's came the movie,  "Urban Cowboy".  The Dance Hall scene exploded.  Places like the Silver Dollar, Double Eagle, The Broken Spoke, The Lumber Yard, Dessau Hall, all enjoyed many years of capacity crowds. 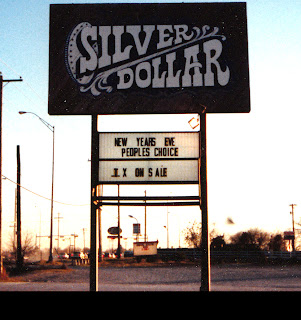 This photo was taken on Dec 31, 1980.
The intersection in the background is
183 & Burnet
In the 90's, the price of Real Estate began to steadily increase, driving most of the halls out of Austin. The crowds, however, quickly found alternatives in the urban areas.  Places like Dessau Hall, The Round Rock S.P.J.S.T. Hall, Eds River Palace in Johnson City all flourished during the 90's.

By the turn of the Millennium, most of the BIG dance halls were gone from Austin.  The Broken Spoke and Midnight Rodeo (formerly Dance Across Texas) survived.  The last founder, Stacey Poole, left the band in 2001.

Today; in addition to performing in public venues, People's Choice has become a favorite to bring in for numerous private events.   Hopefully, we'll see you soon!
Posted by People's Choice Band at 8:07 PM No comments:

People's Choice Band
Established in 1976. Entertaining audiences in and around Texas ever since. Continuously evolving, always delivering strong and versatile performances in the greatest dancehalls Texas has ever seen.